The parliament in Cyprus has voted to steal a portion of all bank deposits in the country. They’ve also declared a bank “holiday” while they work out the details to stop people from accessing their savings.

The economics seem to make sense from the point of view of the elites running Europe. Western governments have convinced themselves that saving is bad. This allows them to devalue their currencies to discourage it. So why not directly steal savings? That will teach people to save money.

Of course people may choose to take their money out of the banks now. Have the elites thought this through? Maybe they’ll go the way of Sweden and create a cashless society where the only way you can make legal transactions is with a bank debit card. We will see. And if you think somehow a similar situation occurring in Cyprus can’t happen in the USA, learn some basic history.

Regardless of whether this makes any sense in terms of shoring up the Cyprus economy, what really strikes me about this is the lack of democracy. It’s quite obvious that very few Cypriots support this measure. If they had a chance to vote on it, I’m sure most would vote no. But aren’t all European countries democracies? How can the elites reconcile their worship of democracy with their lust for state power when the majority doesn’t back their schemes?

Of course I don’t endorse democracy. The United States is not supposed to be one despite what George Bush and Barack Obama have told us. It seems like an incredibly dangerous way to try and order society. Basically it amounts to mob rule, the tyranny of the majority, etc. etc. Hopefully some good can come out of this outright theft of people’s savings without any popular support. Europeans (and possibly even Americans) may finally realize that they don’t live in a democracy. They live under the power of the state that does not represent them.

I’ve had issues with Rand Paul since his election in 2010.  I think he compromises too much with the neocons for political gain.  But you have to admire the courage it took to filibuster the drone killer Brennan. He’ll get a lot of heat from the Lindsey Graham’s of the world, but he made people wake up and face the fact that this president literally claims the right to kill anyone he wants.  And once this precedent is set, all presidents will claim the same power. 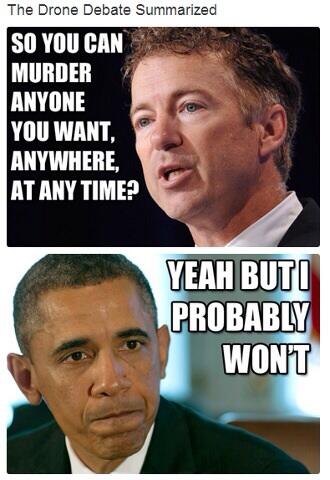 That’s what some man named Bernhard Felderer, an economist at the Institute for Advanced Studies in Vienna, was quoted as saying in the New York Times. He was asked about a proposal from a new anti-Euro candidate in Austria who had some electoral success recently.

The proposal was for each country to have their own Euro, but that seems to be the same thing as returning to the Austrian Schilling and just calling it the Austrian Euro. It would be different from the Italian Euro, the Irish Euro, etc. But this quote is really over the top. The Euro only dates back to 1999. So this Felderer character, the only economist the Times bothered to quote in this article, thinks returning to a system used in 1998 is “completely crazy?”  Really?  Was Europe such a horrible place in 1998?  Is it working so much better now?  Are the Austrians and Germans better off because the southern governments have racked up huge debts and stuck them with the bills?

I have a better proposal. Just let people use whatever they want as money. I believe this would eventually lead to the demise of the Euro, the Dollar, the Pound, and all phony paper money in the long run, but it would lead to a more prosperous society. I wonder what Mr. Felderer’s reaction to that proposal would be?