I love the scandals currently plaguing the Obama White House.  Anything that diminishes the bloated office of the presidency is a good thing for someone who believes in individual liberty.  However, for those who of us who oppose this government, but are not just partisan Republicans, some thoughts:

The AP and Fox News had some of their phones tapped by the Justice (sic) Dept.  Now this is bad.  A decent government (if such a thing is possible) wouldn’t be so paranoid about the evil they’re committing to worry what the AP might say about them.  However, the establishment press in this country is little more than a propaganda outlet for the regime in Washington so it’s hard to feel sorry when their masters abuse them a bit.

The IRS made it more difficult, and in some cases impossible, for conservative groups to get tax tempt status.  Big deal.  Presidential administrations have always used the IRS to harass their political opponents.  This is nothing new, especially for Democrats.  The real scandal should be that the government claims ownership of our income and uses this enforcement agency to extract whatever percentage they want at gunpoint.

Obama’s State Department seems to have done its best to distort and cover up what happened to the US Ambassador in Benghazi.  The Republican neocons have been freaking out over this.  It’s unclear exactly why this was covered up.  I can’t see how there would have been any real political consequences for the president if it had been made clear this was a planned attack by Islamic militants as opposed to a protest over an internet video.  But the real lesson is being completely ignored in this “scandal.”  The lesson of course is that if the West overthrows a secular dictator in a country with lots of Islamic radicals, Islamic radicals are going to gain power and attack the West.  Duh.  The same thing happened in Iraq.  Now McCain wants to repeat this mistake in Syria.

Well I hope Obama’s second term gets bogged down by these “scandals,” and he isn’t able to do anymore damage by compromising with the Republicans to pass more bad legislation.  But let’s hope Libertarians do not lose sight of the real problem in Washington. 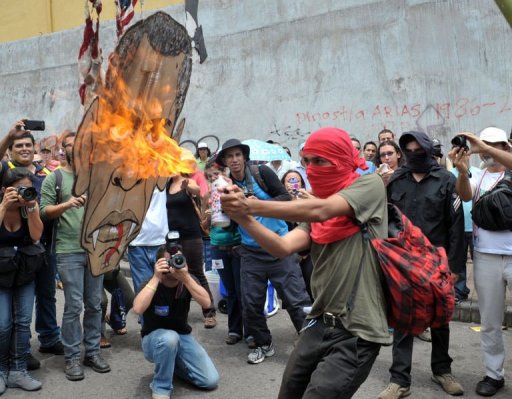 My favorite comment on Yahoo about this was from someone calling themselves BlueStar:

“For the first time in my adult life, I am proud of Costa Rica.”

The story keeps changing as the media and the various government agencies can’t seem to get their lies straight.  Now it seems maybe the younger brother wasn’t shot after all.  Nobody really knows.  The idea that no one in the government can figure out if the kid had a gunshot wound or not seems ridiculous.  I don’t know what to make of it.

This reminds me of the original report of how they robbed a 7-11. That turned out to be untrue as well.

And I’m very skeptical of the whole “Little Brother runs over Older Brother” story. At least one eye witness claims the cops shot him.

And while I should have put this in my original post, we all need to remember that the State spends hundreds of billions of dollars on “Homeland Security” which includes giving Federal grants to local cops so they can buy tanks and armor and cool looking “assault” rifles that the rest of us aren’t supposed to own. Despite this vast expense stolen from the productive members of society, they were still unable to stop a couple young punks from blowing up bombs at a crowded sporting event. THEY FAILED MISERABLY.

Then they failed to apprehend them without little brother getting away.  Then they brought the whole area to a halt costing millions of dollars in lost economic activity (Although Dunkin’ Donuts was open so the fat pigs could stuff their faces).  All of this failed to catch little brother until a private citizen spotted him.  The result of this epic failure, they say, is we need to give them more money and more power.

I know I’m behind the times here, but I just couldn’t bring myself to comment on the Boston Murders until now. Quite frankly I was just too disgusted with the response of the State, the Media, and the useful idiots known as the majority of residents in the Boston area. But hey, I guess I should have my say before our masters in Washington take that right away too. Some thoughts:

The idea that the State could put an entire city and the surrounding suburbs on house arrest to catch one teenager who allegedly killed three people is truly frightening.

The fact that so many people cheered them on and gladly cowered in their homes rather than go about their daily business is disgusting.

The pigs in Boston and the surrounding area pigs who were brought in sure looked like tough guys.

It’s interesting however, that they did not find the kid who was hiding in a boat even though he was in the area they were searching.  They just gave up and since they didn’t find him, it was now okay for the residents of Boston and Watertown to come outside. What changed? He was still on the loose. I thought the people were confined to their house for their own safety because a killer terrorist Muslim evil doer was on the loose trying to kill them all.  Well he was still on the loose when they let everybody outside again so that was obviously a lie.

A private citizen discovered him.  The cops showed up and shot at the unarmed teenager a bunch of times most likely because they wanted him dead.  Somehow he survived and is now locked in a government dungeon.  Who knows when or if we will ever hear from him again.  Of course they initially lied and said it was a “fire fight.”

Since he was shot through the throat, they doped him up and made him sign some confession supposedly stating he acted alone with his brother and did it because of Iraq and Afghanistan.  As far as I can tell there is no reason to believe any of this, but I suppose it could be true.

If the official story on all this is true, it seems the Chechens, who America has been encouraging for years to attack Russia, may be starting to turn on their US allies.  Sort of like Al-Qaeda.  We’ll probably start hearing that Chechnya is now an Al-Qaeda stronghold and NATO will have to bomb it and install a puppet Islamist or something crazy.  I’m sure John McCain would back it.

On average at least 1 person is murdered in Chicago everyday, but those are mostly black people in Obama’s old stomping ground so why would he care?  He needs to focus on dead white people in New England to scare Americans about guns and evil terrorists.

I could go on and on about this.  I probably will in future posts.