The Dear Leader’s wife is in China talking down to them like a typical American “Liberal.”  A few thoughts on her talk to some students there.

And then there’s this other guy I know who was raised by a single mother who sometimes struggled to afford food for their family.  But like me, this guy got scholarships and loans to attend universities.  He became a lawyer and a professor, and then he was a state senator and then a national senator.  And then, he became President of the United States.  This guy I’m talking about is my husband, Barack Obama.

Oh please.  His mother was single all of one year from the time he was born until he was 19.  Why do you think the birthers call him Barry Soetoro?  Because that was his Indonesian stepfather’s name.  And she hardly “raised” him.  He lived with his white grandparents from the time he was 10.  That’s after living with Mama and Papa Soetoro in Indonesia for several years.

We also believe that everyone is equal, and that we all have the right to say what we think and worship as we choose, even when others don’t like what we say or don’t always agree with what we believe.

Many decades ago, there were actually laws in America that allowed discrimination against black people like me, who are a minority in the United States.

It’s crazy how a lawyer can get this completely backwards.  There weren’t laws “allowing” discrimination.  People have traditionally been free to discriminate against anyone they wanted for any reason.  This was simply freedom of association.  The absense of any laws allowed this.

To this day I’m allowed to discriminate against black people by not letting them into my house if I so choose, even if I’m throwing a party.  The government hasn’t passed a law saying this, but it’s still true.

What happened during the so called Civil Rights Era, is that business owners lost this right.  The national government passed laws that said you can’t discriminate against people based on race when running a private business.

The laws this ignoramus is probably referring to are the Jim Crow Laws.  But these laws forced private businesses to discriminate against black people.  So it was in fact the State, so beloved by the Obamas, that was responsible for the majority of discrimination in the Southern United States.  After all, if these evil capitalists were so keen on discriminating against potential black customers, why the need to pass laws forcing them to do it?

The State in Washington, D.C., rather than just declaring these laws unconstitutional or amending the constitution if necessary, decided they should force black people and white people to associate with each other.  Thanks to their wise leadership, every major city in America is now completely segregated.  Thanks guys.

Dianne Feinstein, head of the Senate Intelligence Committee, says the CIA illegally searched her staff’s computers and removed documents.  According to her this was done to thwart her investigation into the CIA’s torture program.

Now, normally I would be concerned that the executive branch’s foreign intelligence agency is spying on a member of Congress.  This might raise serious constitutional questions involving the separation of powers and the fourth amendment.

But as Senator Feinstein herself has reminded us time and time again, all this spying is for our own protection.  I’m sure the CIA had a very good reason for what they did.  It was certainly for national security.  They probably saved a number of lives including Diane Feinstein’s.  For all we know, a bunch of crazy right wing, Ron Paul supporting, anti-government terrorists had infiltrated her staff and were planning to blow up the Capitol building.  Quite frankly I don’t even want to think about it.  I’m just glad the CIA and the NSA are there to protect us.

What really upsets me is that Senator Feinstein leaked this information to the public!  She jeopardized national security by letting the rest of us in on a CIA operation.  If she had concerns she should have addressed them privately with the head of the CIA or President Obama.  It is just plain irresponsible for her to make accusations in the press like that. She’s putting the safety of all Americans at risk. 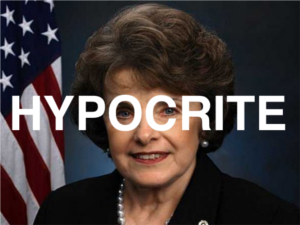 I’ll admit I don’t lose sleep at night worrying about the fate of Ukraine.  I wish the people there well, but it’s certainly none of my business who runs their government.  It also won’t affect me, or any other ordinary American, whether they enter into a trade deal with the EU or Russia.  Why this “crisis” is such an urgent matter to Obama and the maniacs who seem to control his foreign policy is really beyond me.

But hey, if I have to choose between Obama and Putin on this one, I’m choosing Putin.  I know that makes me anti-American commie pinko scum, but what can I say.

The way I see it, Ukraine is full of Russians who elected a pro-Russian government.  This government backed out of a trade deal with the US controlled EU in favor of one with Russia because Putin offered a bigger bribe.  The American Empire didn’t like this so they financed some “protests” that quickly turned violent and overthrew the duly elected government in Kiev and installed a pro-Western government.

Now the Ukrainians get an IMF takeover while John Kerry and John McCain sing their praises and claim their coup is somehow democratic.  Never mind their Nazi roots. The Russians living in Crimea do the same thing in reverse and install a pro-Russian government. The Russians do the predictable thing and send in troops. After all they have a Naval base there and Crimea is mostly Russian. In fact it was part of Russia until the Soviets made it part of Ukraine in the fifties. The US State doesn’t like this and makes a lot of threats, but no one pretends for a second they’re actually going to wage war here. Instead they threaten to kick Putin out of their country club and contemplate the dreaded economic sanctions. We’ll see how well that works once the Europeans have to pay more for their natural gas. Obama might not have noticed but some of those Mediterranean countries are fucking poor.

Anyway, like I said before I won’t lose any sleep over this. I don’t believe Obama or his puppet masters are stupid enough to actually attack Russian troops so whatever happens here is unlikely to have much effect on me. Thank God McCain’s not president.

I hope the Russians living in the East of Ukraine can just secede relatively peacefully, join Russia, and let the actual Ukrainians who mainly live in the West have their IMF controlled “democratic” state they seem to want. Hell I can’t blame them for not liking the Russians.

But most importantly, I hope Obama, Kerry, and the rest of them just shut the hell up about it. They’re making themselves look stupid, and they’re needlessly pissing off a country with hundreds of nuclear missiles.