Two policemen were murdered in Brooklyn over the weekend.  The man who killed them was black, and apparently he was upset by the recent killings of black men by police.  I reject violence in every instance other than self defense.  It is never justified to murder someone.  It is certainly not justifiable to murder cops sitting in their parked patrol car which is what allegedly happened in this case.  The State claims the right to kill people.  I do not.

Now that I’ve made clear my aversion to violence, let’s just stop with the nonsense about there being a “War on Cops” or that we need to feel sorry for police in general.  I’m white, and I’m as tired as anyone of hearing all this crap about “white privilege,” and how I’m somehow responsible for the average black person being poorer than the average non-black person due to my skin tone.  But just because black race hustlers like Al Sharpton and their white liberal ass kissers are all mad at cops lately doesn’t mean cops are good. They’re not.

Police do not exist to protect citizens.  They exist to enforce laws passed by the State.  It is irrelevant to them whether the laws or moral or whether they will actually benefit the community they supposedly serve in any way.  Therefore taking the job of a police officer is in itself immoral. 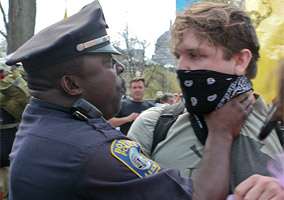 What does a typical cop spend the majority of his time doing?  Pulling over people for minor traffic infractions (regardless of whether there was actually any safety issue involved) and issuing them fines for this, harassing and arresting people for victimless “crimes” (selling drugs, sex, or untaxed legal items), and filling out reports after an actual crime or accident.  Just ask yourself if a cop has ever protected you from anything.  Has one even helped you in any significant way?  Do you feel safer when a cop pulls up behind you in his car or knocks on your door?  The police are armed revenue collectors and government enforcers.  They are not public servants.

And in case there are any racists reading this who flat out hate black people and think it’s great that cops harass, beat, or kill them, just wait until it’s you or one of your white buddies.  Don’t think it can happen?

The GOP already controlled the House even before their landslide election last month. So here are a few items those “fiscally conservative” Republicans decided to pay for with the money they will be stealing from you next year. This is part of a bill that wastes over $1 trillion. And I mean the entire $1.1 trillion because every last dime is a waste of money as far as I’m concerned including so called “Defense,” “Homeland Security,” “Social Security,” and every other scheme these thieves use to buy votes. I admit to basing this all on the Washington Post which is basically just Government propaganda.  So that’s why there aren’t dollar amounts next to some of the more expensive items. 1. Obamacare (Fully Funded).
2. War in Afghanistan (conditioned on the Afghan government letting the American military stay there forever)
3. Amtrak $1.39 billion. Anyone outside of the Boston/NYC/DC area ridden one of these in their entire lives?
4. CDC $7 billion. (including $42 million to fight Ebola) I’m sure we’d all die of disease without billions spent on a center to control it.
5. Fighting Ebola $5.4 billion. This is a disease that killed a whole 1 person in America who wasn’t even an American.
6. Egypt about $1.5 billion.
7. US Embassies $5.4 billion.
8. EPA $8.1 billion. If the State didn’t protect the environment we’d have all died of pollution long ago. Just ask any Democrat.
9. Eric Cantor’s pet project to fund pediatrics $12.6 million. Someone should tell Eric he lost his reelection.
10. Pay raise for federal employees.
11. FDA $2.6 billion. This is important because otherwise people would be obese and abuse prescription drugs.
12. Torture chambers in Guantanamo Bay.
13. Fighting heroin $7 million. I’m sure they’ll finally eradicate the scourge of heroin. They just needed a few more million dollars.
14. Immigration (Amnesty for Illegal Immigrants) $1 billion+
15. IRS
16. Israel $3.7 Billion (If you suggest this is too much you are a racist anti-Semite).
17. Libya (as long as it rubber stamps the US Benghazi investigation).
18. Jordan $1 billion+
19. Keeping marijuana illegal in DC
20. Transportation: $11 billion (including $150 million for DC subways).
21. Pay raise for our “heroes” who join the military and agree to kill foreigners as directed by Nobel Peace Prize winner Obama.
22. National Institute of Health $30.3 billion. I don’t even know what this is supposed to be. Didn’t they already give the CDC $7 billion?
23. Various Military Empire Building boondoggles: $9.7 Billion. Includes fighting ISIS, training Syrian Rebels to kill (I thought ISIS was Syrian rebels???), training Iraqis to kill, training Kurds to kill, “ongoing operations” in Europe (I don’t even want to know what this is), and bribing the Ukrainians to pick a fight with Russia that they can’t win.
24. Palestinian Authority
25. Pensions (not yours unless you work in some kind of Union job).
26. Post Office (Including the all important Saturday deliveries that must never end).
27. WIC $6.6 billion (this is like extra food stamps for poor women who have kids, but the fathers don’t bother to stick around).
28. Dept of Education $70.5 billion
29. Railroads
30. Bureau of Land Management efforts to conserve sage-grouse habitats $15 million (don’t ask).
31. School lunch program
32. Preventing sexual assault in the military $257 million (Good Luck!)
33. United Nations
34. US Capitol Police: $348 million ($196K per officer)
35. Restoring the Capitol Dome: $21 million
36. Veterans of the Military Empire
37. Enforcing whistleblower laws $500,000. Hopefully that doesn’t mean punishing whistleblowers, but that’s the only thing I can think of that would cost money.
38. White House: $222 million. I have an idea to save this money. Sell it to the highest bidder and let Emperor Obama pay for his own damn house!!!
39. Paying ranchers whose livestock are eaten by wolves $1 million.
40. Yucca Mountain. Just in case they decide to stuff it with Nuclear waste at a later date.

Thank you GOP and all you Republican voters for flushing another trillion dollars down the toilet!!! Oh well, I’m sure there’s more where that came from!