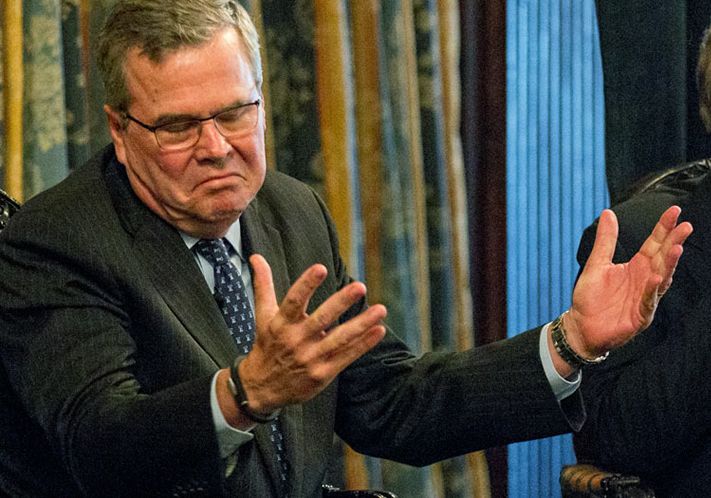 His tax plan “expands the Earned Income Tax Credit” which is just a Welfare scheme.

His tax plan ” ends the employee’s share of the Social Security tax on earnings for workers older than 67.” which is age discrimination in favor of senior citizens who are also the wealthiest Americans.

“I want to eliminate the convoluted, lobbyist-created loopholes in the code.” which means he wants to raise taxes.

His plan will “will eliminate most corporate tax deductions” which again is code for raising taxes.

“The president should be able to eliminate wasteful spending through a constitutionally sound line-item veto – such as the version that Congressman Paul Ryan has proposed.” This means he wants the executive branch to basically write the laws.  Be more of a dictatorship.

His goal is “reducing the size of the bureaucracy by 10 percent within 4 years.”  Please, it should be cut much more than that.

“There are a lot of exemplary employees in the federal government.”  No comment.

“The reality is that Congress is in session for three days in a typical week anyway, so it’s not asking too much that every member be there and work on those days. And if it’s an incentive they need, how about the one that pretty much every worker in America has in their job: you don’t show up, you don’t get paid for that time.”  I’d prefer to pay them to stay home.

“one of the very gravest threats we face today comes from radical Islamic terrorists.” The greatest threat is another Bush presidency.  After all it was W who allowed 9/11 to happen.  It was W that caused ISIS with his occupation of Iraq. 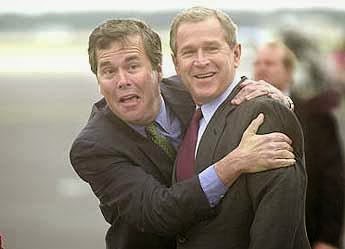 Speaking of Iraq: “the surge of military and diplomatic operations that turned events toward victory.”  Right.  So his bro won the war.  I guess Nixon won Vietnam.

On Iran: “Here is a regime that supports terrorism, threatens to destroy Israel, has for years been trying to develop nuclear weapons, routinely commits human rights violations, was responsible for the deaths of hundreds of American troops in Iraq, and even now is unlawfully detaining American citizens.”  So they killed hundreds of foreign invaders in their neighboring country (allegedly. He doesn’t back it up with any evidence).  The USA killed hundreds of thousands in Iraq on the other side of the planet for no reason.  Who’s the real bad guy here?

“Iran, its ally Assad, its terrorist proxy Hizballah, and the sectarian militias it sponsors have fueled the conflicts in Syria and Iraq, that have helped give rise to ISIS. Yet the president’s deal with Iran confronts none of these problems.”  So I guess he’s unaware that Iran and its ally Assad are actually fighting ISIS.

“Egypt and Saudi Arabia, the most populous Arab country and the wealthiest, are important partners of the United States.”  Who flew those planes into the World Trade Center again?

“we must support the Iraqi forces”  What’s the definition of insanity?

“we must give these forces the consistent advantage of American air power, to cover their operations and to strike with fierce precision.”  Are you fucking kidding me?  Are “we” going to bomb Iraq forever?  “We” have been bombing them since I was a little kid.

“Third, we must make better use of the limited forces we have by giving them a greater range of action.  Right now, we have around 3,500 soldiers and marines in Iraq, and more may well be needed.”  So he’s just going to re-invade that fucking shithole.  Again, the definition of insanity is?

“Canadian troops are already embedded in Iraqi units to very good effect.”  So let them fight the fucking war.  If Canada gets involved somewhere that means the USA has to?

“we should provide more support to the Kurds” because they’re so great.

“Only Iraq’s Shiites, Sunnis, and Kurds can decide if they will live together and share power and resources in a way that will serve their interests, assuring the survival of their country.  But these partners have to know that while the United States is there in measure, we are also there in earnest and for the long haul.  They will come through for their country, but they’ve got to be certain that we have their back.”  What has happened in Iraq over the last twelve years that suggests this is at all possible.

“Third, we must over time establish multiple safe zones in Syria.  It’s a measure of progress that we have joined with the Turks to create a small, ‘ISIS-free zone’ in the northern part of the country.  But we need to go beyond well this, by establishing safe zones to protect Syrians not only from ISIS, but also from Assad.”  Yeah play both sides in a civil war.  That way neither side can win and the war can go on forever.  Who would like to see that?

“For generations, American-led alliances, American diplomacy, and American credibility deterred aggression and defended the peace.”  This has absolutely never been the case.  It’s a nice fairy tale though.  This kind of rhetoric is like heroin to GOP primary voters.

“In all of this, let us never forget that in fighting evil, we are doing good; in stopping the merciless, we are delivering justice; and in destroying the violent, we are defending the innocent.”  If “we” have to kill a bunch of innocent people and waste a few trillion dollars to “fight evil” then so be it.

“We must transform immigration from a broken system into one that benefits every American.”  Sorry, encouraging millions of third world peasants to move here is not going to benefit me no matter how you to try to spin it asshole.

“We have no greater asset than our service members”  Why?  What have they done for the average American?  Killed some Iraqis?  Killed some Afghanis?  Explain how that benefited anyone other than the political classes of the US and Israel and the merchants of death.

Anyway, needless to say I will not be endorsing this wannabe Mexican for President of the United States. I have no issue with the Pope visiting the United States per se.  I’m sure lots of Americans want to see Francis in person and listen to his fairy tales about Jesus being a communist or his lectures on how Germany should encourage more Muslims to immigrate there.  I once attended a conference where the former governor of Utah was paid a handsome fee to speak about healthcare for some reason.  So I’m well aware that people like to listen to celebrities say idiotic things on topics they know little about.  It’s certainly not limited to Catholics and their infatuation with the papacy.

However, why should the US government spend millions of dollars on security and other measures to accommodate His Holiness visit?  I’ll put aside any dogmatic libertarian theory here and look at this from a more conservative “is it good for the taxpayer?” argument.

So  Pope Francis, with all due respect (which is none), enter the United States at your own risk and follow the same laws Americans are forced to endure or stay the fuck out! Ann Coulter seems close to being excommunicated from the Fox News, Neocon, “acceptable” branch of conservatism because she dared suggest that Republicans care too much about Israel.  To make matters worse, she used the word “Jews.”  Doesn’t matter how much admiration she’s shown for Benjamin Netanyahu in the past, her approval of massive German civilian casualties in World War II, or her advocacy on behalf of murdering muslims.

Just as I predicted, former front runner Scott Walker ended his pathetic bid to win the Republican nomination for President. 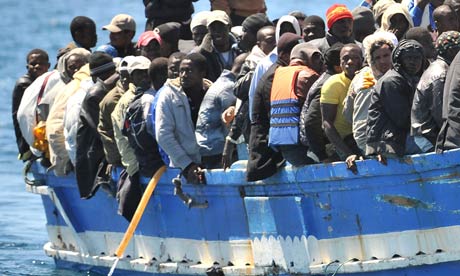 Many on the political right favor a so called “strong leader” for a variety of reasons, one of which is to restrict immigration.  This is a main reason behind the current popularity of Donald Trump in the Republican party.  He’s claimed the immigration issue as his own by promising to enforce the borders and making wild claims about deporting millions of illegal immigrants.

What these right wingers should understand, however, is that in a truly libertarian society, there would likely be much less migration and basically none into localities that didn’t want it. What we have now, as others have pointed out, is forced immigration.

First off, if all property in a given territory was privately owned, then the property owners themselves would have to invite migrants onto their land.  Otherwise, if they showed up they would simply be trespassing, and the locals could forcibly remove them.  Instead what we have is a situation where the State directly owns a large amount of the land.  The government owns the roads, the parks, the schools, among other things and they decide who can access them.  They also claim property rights on much of what is nominally considered “private.”  For example, you can’t discriminate against any person based on their language, religion, or country of origin when running a business or renting an apartment.  So if the residents of a town don’t like the influx of foreigners that have recently showed up, there is very little they can do to maintain their cultural hegemony.

It’s also worth noting that the State directly subsidizes immigration.  Immediately upon crossing an imaginary line separating Texas from Mexico, a person finds themselves entitled to free education for their children and free medical care at any of the local hospitals.  Discrimination, that evil, evil word, is not allowed.  A newly arrived foreigner may also be able to get some direct Welfare benefits depending on their specific circumstances.  In a libertarian society, of course, the State wouldn’t have access to the tax funds necessary to pay for this.  They would also lack the authority to force hospitals to treat anyone they didn’t want to or local school systems to educate people they didn’t want to.

There is one last thing that States do that leads to more migration of peoples. This is one that’s really going to be hard for “conservatives” to hear because it’s the one part of government they universally seem to love.  That is WAR.  Without a powerful State, there would not be trillions of dollars available to be used to bomb and destroy foreign countries. It should be fairly obvious that if you destabilize a place by blowing it up and killing a bunch of people, that the natives of that land will want to leave.  And guess where they want to go?  Rich, Western, predominantly (for now) white countries.  The Bush/Obama wars of aggression against Iraq, Syria, Libya, and Afghanistan have opened the floodgates of millions of Asians and Africans trying to get into Europe.  The decades long drug war has helped destabilize Mexico and contributed to millions of Hispanics entering the USA.

Can Trump stop the tide?  No one could really know for sure, but I highly doubt it.  The real way to lower immigration is to dismantle the State.