Neocon Byron York thinks Obama, or at least one of his closest lackeys, should have gone to Paris to march in the Unity Rally. Now Neocon journalists, columnists, and talking heads (York would probably qualify as all 3), exist mainly for the following reasons: Defend the Israeli government from all criticism and promote US involvement in every war anywhere on the planet.  So it’s not surprising they would use the Charlie Hebdo murders as an excuse to criticize a Democratic president who has been less bellicose than his Republican predecessor when it comes to threatening death and destruction on Israel’s chosen enemies.

But this stupidity about how Obama or Biden or Kerry had to march in some French parade that supposedly has to do with freedom of speech is one of the dumber arguments these so-called “conservatives” have made lately.  I just have to point out some inconvenient facts for York, Fox News, the Weekly Standard, The War Street Journal, the New York Post, and anyone else who thinks World War III needs to commence over a shooting at a magazine in France that no one who doesn’t speak French has ever heard of:

1. France does not have free speech protection.  There is no 1st Amendment in France. They will throw you in jail if you criticize the wrong ethnic group or question the official narrative regarding the Holocaust.

2, Obama does not believe in free speech.  He jails whistle blowers, spies on journalists, and wants to “regulate” the internet.

3. Charlie Hebdo does not believe in free speech.  They have urged the National Front Party in France to be banned.

4. Charlie Hebdo hates Christianity.  They’ve mocked it even more than Islam.  Yet many Christian conservatives apparently want to escalate the Terror War to avenge some left-wing Atheist French newspaper.

5. Obama would have been criticized if he’d gone.  And rightfully so for that matter.  It’s a huge waste of money for the President to travel abroad with his multi-million dollar security detail that has to be paid for by tax victims of the US and host governments. 6. None of the “world leaders” who showed up for the Unity Rally believe in free speech either.  Many of them also use their militaries to commit violence to further their political goals (what’s the definition of terrorism again?). 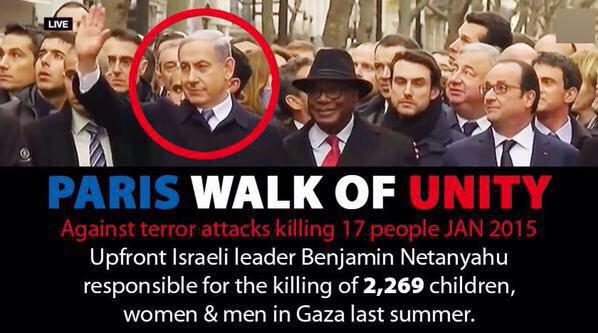 7. 20 people were killed.  That sucks.  It happened in France, not the USA.  It’s France’s problem.  Mass killings like this unfortunately happen in the USA several times a year, but I don’t think we need the French President coming over here to protect us.  Not everything is the US President’s responsibility!

8. What possible difference would it have made if Obama had been there?  Would ISIS cease to exist?  Would Muslims all over the world decide they love the the Empire now that the leader of the “Free” World marched in some dumb parade?  Why does corny symbolism matter so much to these hyper-nationalist armchair warriors?