England is a small island nation east of America, west of Russia, and north of Africa. It’s referred to by many different names including Scotland, the UK, Britain, “Great” Britain, Wales, Ireland, Northern Ireland, Western Europe, America’s Bitch, the UKKK, and so on. England ruled almost the entire world as recently as 1939, but today it can barely take care of itself. 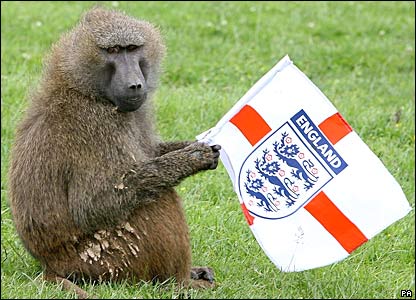 England has been around for thousands of years, but has faced constant upheaval and genocide of the various ethnic groups that have occupied it over the millennia.  Originally populated by Celts, they were forced off their native soil by the Jutes.  The Jutes were in turn massacred by the Angles, who gave way to the Saxon’s lust for murder and conquest.  The Romans took over and taught the inhabitants how to talk for the first time. The vikings put a stop to that by raping anyone who spoke in a language they didn’t understand, but finally the Normans lead by William the Conqueror helped him justify his silly nickname by conquering the whole damn Island in 1066, killing anyone who resisted.

The English kept up their violent tendencies for the next few centuries, but nothing of any significance took place until Henry the VIII converted to a version of Christianity that accepted matricide.  Although the English public generally approved of this and cheered on the beheadings of Henry’s wives, it nonetheless led to a new round of civil wars.  Finally one of Henry’s bastard daughters, Elizabeth, took over and began to direct the ultra-violent tendencies of her people outward onto foreigners.

Elizabeth united her subjects by starting a war with Spain which the English won by setting fire to the Spanish Armada.  After that England was the world’s greatest naval power.  They abused this power by often starting wars with France which they knew they could win.  They also conquered many backward nations that didn’t have boats or guns in America, Asia, Africa, and even parts of India and China.

The English Empire (or British Empire as it was known then) expanded over the next few centuries to rule practically everywhere outside of Europe that the Spanish didn’t already rule.  The only setback was when some greedy traitors in America revolted with the help of the French.  The English eventually gave up this fight due to lack of interest but came back several years later to burn down Washington D.C. to satisfy their blood lust.

Things were going pretty well until the 20th century came around and Winston Churchill took over Parliament and twice declared war on Germany.  This initially seemed like a fine idea to most Britons, but unfortunately they hadn’t actually fought any white people in a very long time and were out of practice.  Thoroughly outmatched by the superior Aryans, the English nearly lost both wars until they were bailed out by the Americans.  After 1945, Britain gave up her Empire and settled into her present role as America’s Bitch.

England is a monarchy ruled by Queen Elizabeth II.  She’s descended from some Germans who managed to gain control of the country a few years ago.  The Queen’s main responsibilities include handing out death sentences, oppressing people, showing off her crown jewels, and collecting taxes on tea.

England also has a parliament that is elected by dirty commoners.  Their main responsibility is to act like they’re important and to help America start wars.  There is also an upper house known as the House of Lords.  Their only responsibility is to get drunk and have sex parties with the Queen.

England is made up of various Ethnic groups such as the English, the British, the Irish, the Welsh, and the Scots.  The English live mostly in London which used to be the largest city in the world, but now has only a few hundred people.  The Scots are hill people who live in the Northernmost region of England and wear dresses.  The Irish mostly live in America now, but a few dozen remain on a tiny rock off the coast of Wales.  The Welsh live exclusively on fishing boats as the English have consistently flooded the swamp they previously inhabited as part of the annual Easter celebration.

Everyone in England speaks English except the Welsh who speak Dutch and the British who mainly speak American.  The latter 2 groups make up about 90% of the population of England.

The official religion of England is Atheism which is strictly enforced.  However, the Irish insist on respecting Papal authority despite giving up on Catholicism in the 1980’s.  The royal family continues to attend the Church of England which at this point is just a combination of Communism and Islam.

London is considered by many to be the financial capital of the world, but in fact those people are wrong.  Still, roughly a third of the English population is employed in the banksterism sector.Another third is unemployed and on welfare.  The rest of the English earn a living in one of three industries: Tea, English Muffins, or Crappy Pop Music.