Added a new section about America in the Humor Page

I’m actually not very frightened by this Ebola outbreak.  I mean sure, it’s quite scary if you actually have the disease.  Looks like a horrible way to die.  But I think people are getting carried away.  As of this post, one person has caught the disease in the entire United States.  This is probably the one threat that is actually smaller than terrorism.  The whole thing reminds me of swine flu, bird flu, SARS, West Nile Virus and probably a bunch of other “outbreaks” I’m forgetting about.  Every year around this time the media try to scare us by exaggerating some UN or CDC bullshit that comes out.  Usually this results in a drug manufacturer making a fortune.  It remains to be seen, but it wouldn’t surprise me if somebody ends up making a bunch of money off Ebola.

What strikes me as particularly interesting about this whole thing, however, is the ridiculous contradictions we see coming from the Obama regime.  And I’m not even talking about misstatements like suggesting you can’t catch it by riding a bus, but you can spread it by riding a bus.  No, what I’m referring to is the way Obama simultaneously wants to downplay the threat, while also claiming the entire “world” must confront this threat that isn’t really dangerous.

Obama wants to send thousands of US troops to the African country of Liberia to direct traffic or something in the hope this will help fight the disease.  So in that sense it’s really dangerous and America must use its powerful military to stop this outbreak dead in its tracks!  But Americans shouldn’t worry that these troops could catch the disease themselves and bring it back to the good ‘ol USA because you know we’re exceptional so Ebola can’t hurt us.

Are we supposed to be scared into supporting the regime’s latest unnecessary, unconstitutional, and just plain stupid military invasion?  Or are we supposed to think it’s no big deal that can’t hurt us, in which case we have to ask why the hell he’s sending troops to Africa and maybe even ask how much it will cost.

My head hurts.  Don’t even get me started on ISIS or ISIL or Iraq or Syria or whatever the hell Obama’s current contradictory story is on that whole mess.

“[T]here’s a sense possibly that the world is spinning so fast and nobody is able to control it,” – Barack Hussein Obama

That’s the headline from the Emperor’s visit to NYC today to beg for money from some of his puppet masters.  I’d like to briefly comment on some of the bullshit that came out of his mouth as he tried to assure us that it is certainly possible for his regime to control this spinning world of ours. And yet if you look at what happened at the General Assembly on the terrorist group ISIS and the need to mobilize an international community to push back against their radical violence, it was the United States that mobilized that coalition both in the Middle East and around the world.

ISIS is not a threat to the United States.  Bombing them however, (and any civilian that happens to get in the way) will likely increase the chance of blowback in the form of Islamic terrorism.  Remember 9/11 after a decade of the Bush/Clinton regimes murdering Iraqis?  Or does Obama still think they attacked us for our freedom?  ISIS wouldn’t even exist if it wasn’t for all of the Empire’s meddling in Syria the last few years.  I don’t think I even need to point out that he has no authority to wage war against them without Congressional approval.  At least GWB would ask Congress before he started his counterproductive wars.  And  who is in this “coalition” he’s so proud of?  Saudi Arabia, United Arab Emirates, Bahrain, Qatar, and Jordan.  These are all theocratic monarchies who regularly torture and even behead political dissidents. What makes them any better than ISIS? When you look at Ebola, a humanitarian crisis in West Africa, but also a public health crisis that has the possibility of affecting people around the world, it was the United States that is committed to building the infrastructure that allows health workers to get in and start saving lives and making sure that children aren’t dying on the streets.

If he was actually interested in protecting Americans from this disease, the least he could do is not force US soldiers into the heart of the epidemic in Africa. 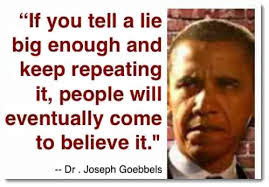 When it came to blunting Russian aggression, it was the United States that mobilized NATO countries and the world community to stand up for the principle that people are independent and have the ability to make their own decisions about their own lives and to seek freedom and prosperity on their own terms.

People are independent unless they’re ethnic Russians that live in Eastern Ukraine.  Then they have no choice but to live under a regime that overthrew a democratically elected government and who hate Russians.  By the way, since when does Obama think people have the ability to make their own decisions or seek prosperity on their own terms? Doesn’t he force me under threat of violence to give a third of my income to him each year because he knows how to spend it better?  Isn’t he forcing me to participate in his fascist healthcare scheme? On climate change, it was the United States that led the way in continuing to mobilize the world community to reduce carbon emissions that are going to affect our kids and our grandchildren.

This scam is getting really old.  People aren’t buying it anymore.  And holding some summit that half the world ignores isn’t “mobilizing the world community.”  Ask the Chinese or Russian or Indian governments if they plan on reducing their carbon emissions.  Hell ask the United States Congress if they plan on passing any laws regarding carbon reduction.  You’ll see how committed everybody is to this nonsense.

On every single issue of importance, when there are challenges and there are opportunities around the world, it’s not Moscow they call; it’s not Beijing. They call us.

When he says “us” he means the regime in Washington D.C. that he is currently figurehead of.  Nobody’s calling me or any other American not affiliated with the tyrants ruling over us to address these “challenges.”  You know why?  Because the rest of us don’t want to fight other people’s wars.  The rest of us don’t want to hand over our money to foreign tyrants.  The rest of us don’t want to bomb and kill people who have never harmed us.  The rest of us aren’t stupid and arrogant enough to think we can control the climate or end disease in Africa.  And who makes up this “they” he refers to who are calling?  The Kings of Saudi Arabia or Jordan?  The Prime Ministers of Israel or the UK?  The bureaucrats at the United Nations or European Union?  Some African dictators?  If you wanted to do the American people a favor you’d tell them to fuck off and stop wasting our money on your idiotic world crusades.

I have to stop with the direct quotes there because the rest of the speech literally made me sick.  I can’t reprint it verbatim on this blog.  Read it if you want to vomit.  I’ll just state that he mentions some garbage about America being the “the one indispensable nation,” blabs on about how “we” stand for “liberty and democracy and conservation and fairness and justice” as if those things have anything to do with each other (conservation???), and then somehow claims that all this is what the Statue of Liberty “means.”

On the bright side, maybe Dear Leader will spend the next two years reading propaganda off his teleprompter to rich Democrats rather than waging wars or further destroying the economy.  I can dream can’t I?