In anticipation of Black History Month, I wanted to share this video

Guns are pretty popular in rural white Vermont.  So Bernie Sanders has never been able to call for a total ban.  But this quote where he basically wants to outlaw any that aren’t used for hunting is kind of amusing.  The constitution specifically protects a right to bear arms, which the socialist from Brooklyn clearly wants to “infringe.”  But I don’t recall anything about hunting rights in there which he is steadfastly determined to protect.

I hope if Bernie ever gets secret service protection, his bodyguards are limited to shotguns and rifles (and they must not be “assault” rifles).  And I hope they leave them at home unless Sanders decides to go hunting.

“I don’t believe in charities,” Sanders said before explaining that he felt government should be responsible for social programs.

That’s right. He told people having a fundraising drive for the United Way that they should hand over all their money to the State.  He literally doesn’t want people helping each other if he’s not in control of it.

Bernie Sanders is either just plain stupid, or just plain evil.  Just like everyone else running for President.

This might be the best quote I’ve ever heard by a politician who has a serious chance of winning a major party nomination for president:

“Hillary said that guns don’t keep you safe. If she really believes that she should demand that her heavily armed bodyguards quickly disarm!”

The Emperor can send an 18 year old girl or boy off to war to murder on his behalf in a foreign land and possibly be killed or have his body mutilated.  But the Democrats in Obama’s home state don’t think a twenty year old is mature enough to make a decision on whether or not to smoke tobacco. 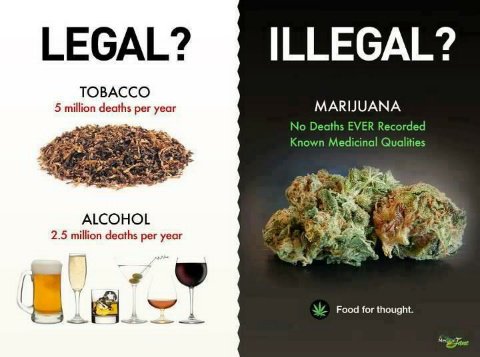 I don’t necessarily buy the death totals in this image I copied from twitter, but certainly tobacco and alcohol are bad for you.  They are also much more likely to kill you.  So the question is, how long before the legal (in certain states) marijuana industry is centralized enough that they can lobby Congress or the White House to remove the Federal ban?

Unfortunately that is probably what it will take.  The regime can’t enforce their own edicts when it comes to banning what is literally a “weed” so local governments have been ignoring them for years.  However, our overlords have no real incentive to change anything as long as the beer companies and tobacco companies have money while the marijuana trade is still mainly in the hands of local mom and pop outfits.  Once a single player captures over 50% of the legal market in the states like Colorado and Washington that have come to their senses on this issue, then maybe the campaign contributions can start flowing and DC will finally remove this ridiculous prohibition.

Of course then they’ll institute a bunch of onerous regulations and taxes putting the small businesses that deal in cannabis out of business.  It’s kind of a lose-lose situation for all the potheads out there.  But at least with legal, “regulated” marijuana available, they won’t wind up in jail or have their career prospects ruined for possessing a plant that Richard Nixon and Ronald Reagan didn’t like. It will still be a step in the right direction. 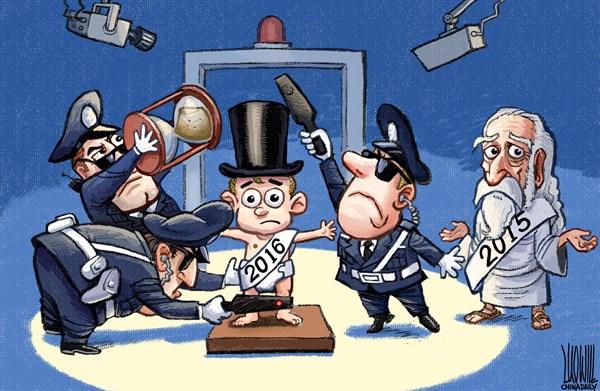 I follow someone on twitter who uses the handle Screwed by State.  He (or she) seems like quite a consistent libertarian on most issues and I’d urge people to follow him to get the latest on the battle over Net neutrality and other topics.  However, he tweeted something this morning that bothered me.  It was this picture: and the tweet was “A sailor on leave with his girl, New Years eve, New York, 1941.”  A quick google search reveals he copied this image from Pinterest and the caption there is “An American sailor of the U.S. Navy rings in 1942 with a companion while on leave. New York City, New York, U.S.A. 31 December 1941. Image taken by Otto Bettmann.”

So there is no evidence that the woman in this picture was the sailor’s “girl” unless  “girl” means the woman he was drinking with on New Year’s Eve in New York City.  Screwed by State apparently wants his followers to imagine this was some brave soldier having one last romantic evening with his future wife before he went off to war to defend his friends and family from the evil Nazis.  It’s at least as likely this is just some woman out having a good time who was attracted to a man in uniform.  I’d say there is probably about a 50% chance these two never saw each other again after New Year’s Day 1942.

Now I don’t care if young men and women want to have a few drinks and sleep together. More power to them as far as I’m concerned.  But why do Americans of seemingly every political outlook have to go around canonizing soldiers, particularly those from the “greatest generation”? Why do so many people assume that American soldiers in the 1940’s were the one military in all of human history who were well behaved and never did anything bad or immoral.  If you saw this same picture, but the man was in regular street clothes, would you really jump to the conclusion that this couple was in some committed relationship?

I have news for you.  Servicemen from World War II weren’t all brave.  They weren’t all good.  Most of them never fought anybody.  They certainly weren’t defending America as they rampaged through Asian jungles or the European countryside thousands of miles from home.

Here are some other images people might want to take a look at:

In this undated image released by the Yokosuka City Council in Japan, U.S. sailors gather in front of a Yasu-ura House “comfort station” in Yokosuka, south of Tokyo. By the late summer of 1944, soon after the Invasion of Normandy, women in Normandy began to complain about rapes by American soldiers. Hundreds of cases were reported.

During the Second World War, the demand from servicemen grew so large that most of the better brothels on Hotel Street simply stopped seeing local men altogether.  To speed things along, a “bull pen” system was instituted:  Hawaiian matrons guarded the doors, turning away any man who was drunk or looked like a troublemaker.  Each then paid his fee and received a poker chip, then waited for an available room where he undressed and waited for the whore who was working in the next room; she would come in, collect her chip, inspect him for signs of venereal disease, quickly wash him and do her work.  He had three minutes to achieve release, after which she said “aloha” and was off to the next room while he washed up and got dressed.  Most brothels required girls to see at least 100 men a day and to work at least 20 days per month

So there are just a few examples of some unsavory behavior by our sainted WWII veterans.  The point isn’t that American soldiers are exceptionally bad.  They’re just not exceptionally good despite all the propaganda.  That includes the “Good War.”  Give a bunch of 18-26 year old men guns and tell them to invade and occupy some foreign country and it will be the same thing every time.  Some will rape women.  A small number will commit war crimes.  A lot will visit prostitutes.  Don’t pretend otherwise just because they wear an American Flag patch on their shoulder.