Their job as Democrats is to “shut white people down.”

Trump spokesman says US won’t allow China to take over some rocks in the South China Sea because they’re in “international territories.”  Gotta love this quote:

The U.S. is going to make sure that we protect our interests there.

Hate to break it to you Donald, but I like just about every other American, don’t have any “interests” in the South China Sea. Stay the hell out of there just like you would expect China to stay out of the Caribbean Sea.  It’s none of “our” business.

America First.  Remember your campaign slogan?  Or your Inaugural Address from 4 days ago?

US drones kill 10 people in Yemen continuing Obama’s “Do anything the Saudis say” policy. No idea who these 10 people are. I’m sure the Saudis didn’t like at least a couple of them, but did they pose any threat to the United States? I’m guessing there’s a 99.99% chance the answer is no.  What happened to “America First”? 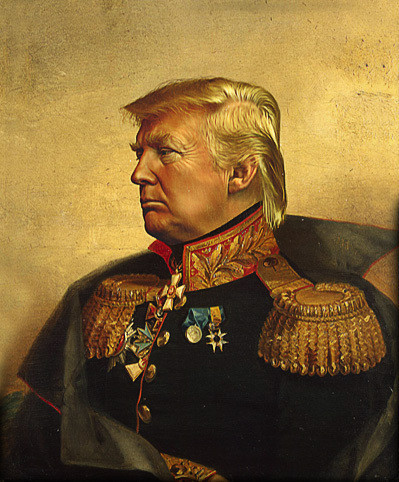 So Trump has survived long enough to be inaugurated as the forty-fifth president of these United States.  What do the next four years hold in store for us assuming the CIA doesn’t assassinate him, get him impeached, or force him to resign?

Best Case Scenario: The United States more or less minds its own business regarding the internal affairs of other nations.

Russia and the United States reach a detente and a new Cold War is avoided.  Tensions in Europe subside.  Rather than expanding, some countries actually quit NATO because Trump tries to force them to pay their share of the military budget.

The US slowly but surely pulls its remaining troops out of Afghanistan and Iraq, and Trump resists the calls to re-invade when the situations on the ground inevitably deteriorate. Russia and the Syrian government smash what is left of ISIS so that issue dies down, and the Donald doesn’t feel obligated to start a fresh bombing campaign.  Trump stops backing Saudi Arabia in its terror war against Yemen.  Despite warmongering rhetoric during and after the campaign on the Republican side, the US leaves the Iran agreement in place.  Israel doesn’t do anything too crazy.

The situation between China and its neighbors de facto stabilizes as Asian countries don’t trust the US to back them up militarily.  Trump lets this happen.

Worst Case Scenario:  Trump can’t resist the War Party propaganda and plunges the military into some foreign quagmire or escalates an existing one.

Tensions with Russia rise because Trump can’t handle being called Putin’s puppet and sabotages the relationship between the two leaders.  More troops and missiles are sent to Eastern Europe and the NATO budget, mainly on the backs of US taxpayers, grows out of control.  I still don’t see a straight up US-Russia war breaking out, but things could get very ugly in this scenario.

The US continues to back destabilizing Israeli and Saudi Arabian policies as the Middle East devolves into all out Sunni-Shia warfare in multiple countries.  Turkey intervenes with US backing.  Trump can’t help but bomb somebody that John McCain doesn’t like.  Ground troops are sent in, but we don’t see anything close to what we had during the Iraq War. 10,000 or so troops remain in Afghanistan killing people and wasting money.

Trump threatens China, visits Taiwan, and says Vietnam or some other country owns the rocks in the South China Sea that China loves so much.  Hundreds of billions of dollars worth of Naval hardware is sent to the region and more bases open.  The US debt skyrockets as a result.

Prediction: Probably wind up somewhere in between, but I’m fairly optimistic in this arena.  I think we’ll end up much closer to the best case scenario than the worst case.  I do think no matter what, the standard military budget will grow unfortunately.  But overall spending on the overseas Empire may actually decline as the US bombs and intervenes less.

Best Case Scenario: Massive deregulation and tax cuts.  The Fed raises rates.  The bubble we’re currently in pops early and the recession comes sooner rather than later.  By 2020, the economy is booming.  Trump is re-elected and the economy continues to improve.  The popular entitlement programs are “shored up” at least for the near term, but some of the more wasteful programs are ended.  Obamacare is repealed and replaced with something that’s a little more efficient and a little less costly (but still bad).  The budgets of various useless cabinet departments stay more or less flat.

Worst Case Scenario: Only superficial deregulation that has no major effect on industry. Tax cuts are blocked.  Fed procrastinates on raising rates.  The bubble pops late in Trump’s term, and Elizabeth Warren or some clueless Obama clone gets elected in 2020 and further decimates the economy leading to Great Depression 2.0.  Several cabinet departments pointlessly grow their budgets.  Obamacare stays in place, bankrupts insurance companies, costs grow out of control, and the next administration introduces the dreaded single payer system.

Prediction:  I’m pretty worried on this one.  I don’t think it will be as dire as the Worst Case Scenario.  But unfortunately I wouldn’t be surprised if Trump ends up a one term president and the Democrat replacement makes Obama look like Friedrich Hayek.

Best Case Scenario: Trump cancels all pending trade deals.  Renegotiates NAFTA so it’s actually a little more liberal (despite rhetoric to the contrary) and is more favorable to small businesses.  There are going to be some protectionist measures taken, but hopefully they are minor, encourage a couple specific companies to open up a few new factories so Trump has a photo op, and nothing too drastic occurs in terms of tariffs.

Worst Case Scenario: Huge tariffs.  A trade war with China.  NAFTA gets renegotiated in a way that helps a few giant American corporations and helps a few thousand people get jobs, but hurts everyone else.  Real consumer prices go through the roof and we’re all worse off.

Prediction: Somewhere in between, but my guess is we’ll see plenty of protectionist measures taken which will cause hardships for average Americans.  Jettisoning these trade deals that have been all the rage for the past twenty-five years may be good in the long term however.  I could also see the dollar continue to strengthen if the Feds raise rates which may offset rising prices due to tariffs.

Best Case Scenario: Welfare programs that rely on federal money are cut off to immigrants who come here illegally.  Localities are no longer required to offer services to illegal immigrants.  The number of legal immigrants is reduced.  Jobs programs that incentivize companies to hire immigrants rather than native born Americans are eliminated.  Less people come here permanently. Those that do are more likely to be productive members of society.  Those that are here to leech off Americans either self deport or head to localities like San Fransisco that seem to get some sort of smug self righteous satisfaction from supporting them.  Everyone is more or less happy and Americans are less suspicious of those foreigners in their midst.

Worst Case Scenario: One of two things can happen.  Congress doesn’t go along with any of Trump’s proposals and he just gives up on enforcement because he’s tired of wasting political capital on it while dealing with a hostile press and protesters.  In this case massive subsidized immigration continues unabated.

The other bad scenario is he goes totally overboard fining and raiding businesses.  He makes border crossing and tourism in the US almost impossible for average people.  The whole endeavor helps grow the police state and life becomes worse for everyone.

Prediction: I think we’ll have some sort of weak version of the best case scenario.  It will be a slight improvement and immigration will slow somewhat.  It’s hard to predict because Trump is the first winning candidate for President in living memory that actually advocated having lower immigration.  But the press will call Trump a horrible Nazi and exaggerate any enforcement measures no matter what happens.  We’ll be subjected to countless news stories about how poor Maria came here form Guatemala so her disabled son Hector could get the medicine he needs, but Trump had them all deported back to their impoverished dirt farm, etc.

Overall Prediction:  Really hard to say.  Trump is obviously a very unorthodox anti-establishment figure.  Unprecedented in modern American politics.  But my best guess is more or less positive.  A lot less war.  Immigration will at least slow somewhat. The culture will stabilize after the leftists get over their current hysteria.  The economy will do okay, and we’ll avoid any major depression.

Because apparently if it’s before he’s sworn in some Obama lackey will be president.

She may be a left wing Democrat, but she’s bravely taking an independent stance against the Washington warmongers in both parties.  Tulsi has picked up the banner left behind by former congressmen Ron Paul and Dennis Kucinich and is calling for peace.  No more funding for terrorists.  Stop taking sides in every damn foreign war on this planet.

He commuted Chelsea Manning’s sentence so hopefully the former Army private will be free in a few months.  Of course Obama’s the one that locked him up in the first place and had him sentenced to a ridiculous 35 years in a government dungeon.  So I won’t give our outgoing Emperor too much credit.  But at least Manning can go home and try to enjoy the rest of his life.  He should be treated as a hero for exposing the US State’s crimes.  He’s certainly not a criminal.

Calls it obsolete.  Of course all “World Leaders” in Europe and the usual DC warmongers are freaking out.

Because as everyone knows, a military alliance that was forged against a country that no longer exists in the aftermath of World War II over seventy years ago must remain intact forever no matter how much money it costs the American taxpayer.

The Merchants of Death have to get paid!

A bunch of professional war mongers left over from the Bush regime are upset that after going on record opposing Trump and attacking his character, he doesn’t want to hire them to work in his administration.

Thank God.  These are evil people who would start World War III if they thought it would be good for their careers.

Trump will have plenty of bad guys in his administration.  But at least he’s got the sense not to bring in people that are openly hostile to him.  Reagan foolishly let the neocons into Washington and they’ve been there ever since, promoting wars and slandering anyone who wants peace.  Do the world a favor and purge them from the GOP.

Your iPhone won’t suddenly have the latest U2 songs on it.  Apparently they’re delaying the release of their new album due to the horror of Trump’s victory.