Here is an interesting article about rising violent crime in Baltimore and Chicago.  Really only certain neighborhoods in Chicago.  It blames poverty, lack of policing (the Ferguson effect), and a surge in demand from suburban white people for drugs.

I hate to break it to the author, but Baltimore and these Chicago neighborhoods were not great places prior to the shooting in Ferguson.  There may have been slightly less murders and gunshots, but these were not safe or desirable places to live.

Options to significantly reduce violence are as follows:

But keep in mind neither of these proposals will turn Baltimore or Chicago’s South Side into nice places.  They will still be violent areas because a lot of the local residents are violent anti-social people.  They will, however, be less violent (although number 1 is probably only a short term solution while number 2 could have a real lasting impact.)

As far as alleviating poverty, that’s a bunch of garbage.  There are plenty of poor people who don’t shoot each other.  If you think giving everybody in Baltimore a few thousand bucks is going to solve anything you’re an idiot or a Democrat.

There is one full proof method to getting rid of violence in these areas.  Convince rich people to move there and gentrify the neighborhoods.  Driving up the rent and getting rid of section 8 housing will turn these into much nicer places.  Of course that’s only because the existing residents will be forced to move and turn some other city or town into a violent cesspool of crime.  Kind of like what happened to Ferguson, Missouri.

The Dilbert guy brags about his Trump predictions here.  He’s usually an interesting read so let’s see how I did.

Trump will never win the GOP nomination. I definitely thought that initially.  I didn’t even really think he was seriously trying.  Although I did start to realize he would probably win around the time Jeb Bush totally fizzled out.  I never though Cruz or Rubio really had a shot.

Trump will never win the presidency. Honestly, I figured most states that were close would just rig the elections and say Hillary won.  I appear to have been wrong (unless of course that happened and Trump would have won by a landslide without it).

Stocks will drop if Trump is elected. I predicted that the Fed would raise rates and tank the economy if Trump was elected.  But I specifically said they would wait until later in his second term so there wouldn’t be time for a recovery prior to the 2020 campaign.  So this could still come true.  Not sure whether it will or not, but the jury is still out.

President Trump will deport ten million illegal immigrants. I never thought this would be possible or that any president, no matter who they are, would have the political courage to attempt it.  I never advocated it either.  My preference on immigration is not to round up as many people as possible and start checking their papers.  I simply want to let far less people into this country moving forward.  Rounding up illegal immigrants en masse and deporting them while letting millions immigrate legally is pointless.

Trump will be gone (impeached, jailed, or quit) by end of 2017. I thought this was a possibility, but never predicted it would happen by the end of 2017.  Seeing how the Russia nonsense has produced absolutely nothing so far that can touch Trump, my best guess he will make it through his first term.  It is hard to predict, however. I’ve never seen the “Deep State” so vociferously opposed to a politician before.  You’d probably have to go back to Nixon’s peace with China and Watergate to see anything remotely like it.

Trump’s immigration ban on several Muslim countries will be found unconstitutional. I never predicted this. I know there are some Left-wing activists posing as Supreme Court Justices these days, but there aren’t five that are that far out there. Can anybody point to the part of the Constitution that says the government is forbidden from controlling who enters the country?

Trump colluded with Russia, and that’s a crime. Anyone who’s bothered to look into this at all and thinks it’s true is delusional. It was obvious to me from the start this was all complete garbage.

Trump obstructed justice (a crime) by firing Comey. Yeah, it’s illegal for the president to fire someone.  This is just partisan nonsense.

Trump’s skills as a “con man” might get him elected but it won’t transfer into doing the job of president. Hard to really judge this.  Every candidate for president is a “con man” in the sense they are lying to get votes.  Did Obama con the country when the said “you can keep your doctor” and that Obamacare would save money and people’s premiums would go down?  I’ve also never taken such a superficial view of the presidency to where part of “doing the job” is reading someone else’s speech on a teleprompter and looking good on TV.  So I didn’t buy into the idea that Obama, or Bill Clinton or Ronald Reagan were doing the job of president so well because they looked good on TV.  At least, that’s not what the office of the president was designed to do.

Trump’s decision to recognize Jerusalem as the capital of Israel will cause huge problems. This decision has caused “huge problems” in other parts of the world and in my opinion, for no good reason.  But to say it’s really affected average Americans, at least so far, would be incorrect.  But then again, it just happened.  This is the type of thing that leads to blowback.

Trump’s tweeting will cause huge problems. I never thought it would cause Trump any huge problems. The press was going to do their best to destroy him no matter what so why not talk straight to his base via Twitter.

GOP will never embrace Trump. I definitely thought that.  But this one is debatable at best. Has the GOP really “embraced” Trump?  He got his tax bill passed, but tax cuts are religion among the Paul Ryans of the world.  Let’s see if they embrace him when he wants to build a wall or actually improve relations with Russia.

Trump will get nothing important done. This is a rather vague statement, but unless he was forced to resign somehow, it would be absurd to say he would get nothing “important” done.  However, whether it would be good or bad is a different story.  Obama got important things done in his first two years but they were all horrible.  (Then he did one good thing in his second term – the Iran deal).

GOP senators will vote against GOP priorities because of President Trump’s mean tweets. Not sure it’s because of his tweets, but with the exception of the tax cuts there have been plenty of senators that have voted against or held up bills that Trump supports. Sometimes with good cause.

Trump will not nominate qualified judges to the Supreme Court. I had slightly more faith in Trump on this issue than basically any other candidate that ran in 2016, save Rand Paul.

Trump is incompetent. Whatever that means I never said it.

Presidential approval polls are a good predictor of how a president will perform. I’ve never put much stock in approval polls.  I don’t necessarily believe they’re accurate in the first place.

The military won’t follow Trump’s orders. The average soldier will blindly do whatever their commanding officer orders.  Whether or not the generals would follow Trump’s orders depends at least somewhat on what those orders are.  It would be interesting to see what would happen if he did anything on the extreme ends.  If he said to close all the overseas bases and bring the troops home, would they actually do it?  On the other end of the spectrum, if he told them to invade China or something crazy would they do that?  Who knows, but I doubt he’ll order them to do anything that they would oppose enough to disobey, and I never predicted he would.

GDP will never stay above 3%. I would never predict that because it’s too easy for the government to manipulate the number.

Trump’s (and really, all Americans’) master, Benjamin Netanyahu arrested and continues to jail a sixteen year old girl for slapping and pushing some Israeli soldiers who were trespassing on her family’s property.

Let’s give him another couple billion. He needs it to protect his poor, innocent, weak, government from evil little girls.

Remember Ahed Tamimi who kicked out two IOF soldiers that wanted to break into her house in Nabi Saleh village in #Ramallah? Ahed and her mother were kidnapped from their house today in a predawn raid. pic.twitter.com/0l4iy11O7I

Did the Feds take a break from trying to overthrow Trump and actually stop a crime from happening?  Doubtful.  This article doesn’t give much info, but my guess is this whole thing was an FBI setup.  They most likely egged this idiot on, gave him phony explosives, and then arrested him claiming to be heroes.  That’s normally how these “investigations” go.  Actual terrorist attacks don’t get foiled so easily.  I’m not aware of the FBI ever stopping someone unless they were the ones planning it.

Can’t say I feel sorry for this guy though: He’s trying to block some lawyer for the merchants-of-death from being appointed as Assistant Attorney General over privacy concerns.  Seems Trump’s nominee is anti-4th amendment and would be in a position to issue warrants to allow even more mass surveillance of innocent people.

This quote in favor of the nominee and mass spying in general really gets me:

“I think it should be a top priority, especially with all that’s occurring in the national security space right now, to have someone senior and approved by the Senate filling such an important role,” – Josh Geltzer, formerly a lawyer in the front office of the National Security Division

I’m so sick of this non-argument that “right now” at this very instant, the world is so dangerous that we have to be spied on twenty-four hours a day to protect us from the evil Emanuel Goldstein or Osama Bin Laden or ISIS or North Korea or Iran or Putin or whatever Cable News thinks I should be scared of.  You see in the past people managed to survive without mass surveillance, but that’s because everybody everywhere was super peaceful and there was never any turmoil anywhere in the world.  Not like today.

128 Nations are against moving the Capital of Israel to Jerusalem.  Now I don’t care who lives in Jerusalem or where the Israeli government decides to put its headquarters.  And I’m all for cutting off aid to the UN.

But of all the things to take a stand on, why is the location of the US Embassy in some tiny country in Asia worth upsetting the vast majority of the world’s governments?  Explain how this benefits average Americans?  Wasn’t that supposed to be the whole point of a Trump presidency?  America first?  He was supposed to stop putting the interests of globalists, neocons, international banksters, etc. before those of normal, everyday American citizens.  So why is he making his biggest foreign policy initiative a totally symbolic move designed to pander to Sheldon Adelson and Bill Kristol while angering the entire Muslim world and just about all of Europe? 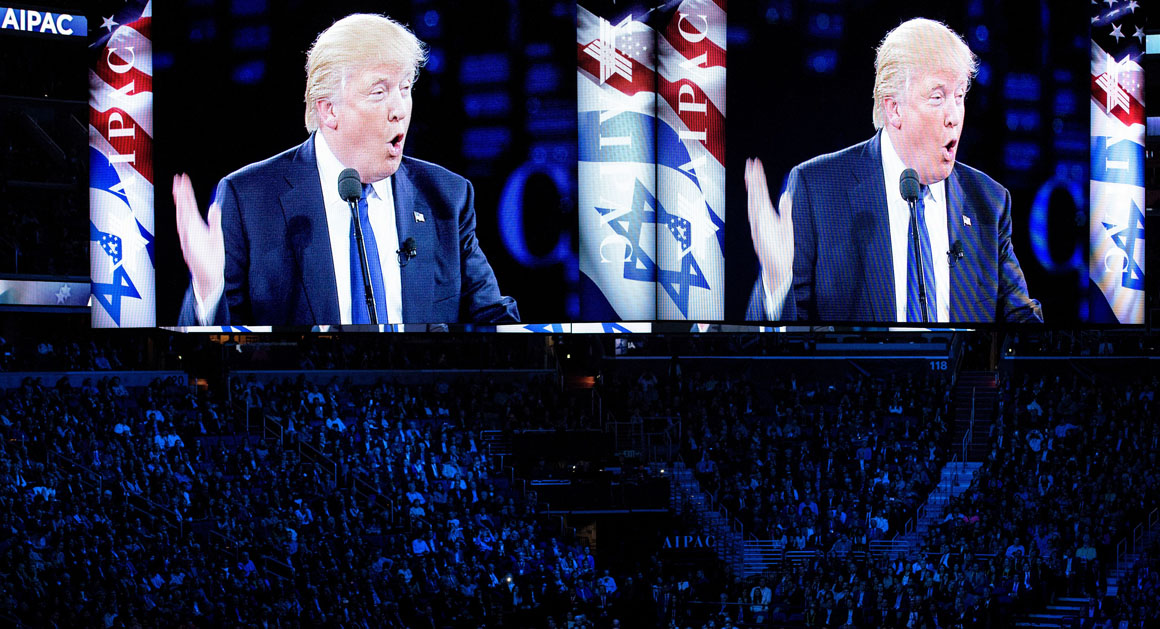 Explain to me how moving the US Embassy in Israel to Jerusalem benefits the average American citizen in any way. I can see how it could benefit war profiteers and a lot of American Israeli-Firsters might like it, but what is that, about 0.1% of the US population? So I’m not seeing much benefit, but I am seeing some serious downsides:

I’ll have to get back to you if I think of anything.

So anyway Trump, thanks for cutting my taxes, but stop sucking up to Netanyahu and put America First.